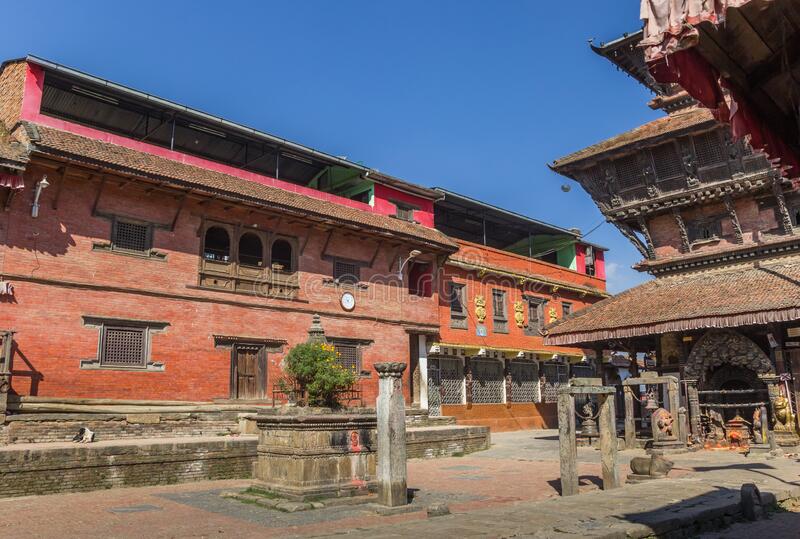 Bagh Bhairav temple, one of the oldest shrines in Kirtipur is known for the guardian deity, Bhairav in the form of a tiger. The main statue and icon are composed of clay with a large silver mask with a depiction of Bhairav. As corroborated by historical facts, the mask was offered by a Kirtipur resident named Chaturman Dware during Chandra Shumsher’s reign.

Also known as Aju Deu in the local Newari language, which translates to Grandfather God, the clay statue is known to degrade due to natural causes. Hence it is replaced with a new one every twenty to thirty years. This sacred act can only be performed by a Buddhist priest of the Bajracharya clan. Final clay mix before mold must contain clays from seven different holy sites. One of the seven sacred sites is Mhaipi, which was the most significant of sacred pilgrimages before the Buddhist and modern Hindu eras.

There are many small temples within the Bagh Bhairav temple complex like most big temples in Nepal. The small ones each have a deity: Ganesh, Barahi, Kumari, Bhramhayani, Vaishnavi, Shiva & Parbati, and a standing Shiva. Also within the complex is a small temple of Kriti Mata with a statue of her giving birth to an unknown creature. She is widely regarded as the mother of Kirtipur. The temple of Narayan, the medium-sized white one of Moughal style (also known as Gumbaz style), along with De Pukhu pond just beside it were also part of the Bagh Bhairav complex. The latter two are outside of the complex today thanks to modern town planning. 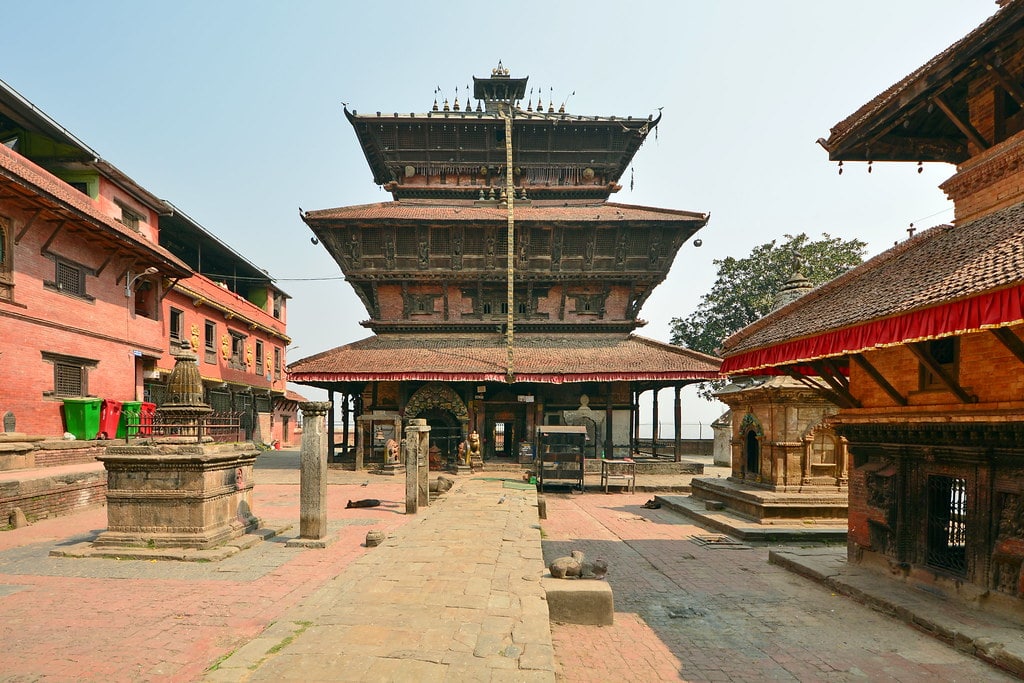 Bagh Bhairav temple itself has some unique features. Offering weapons of defeated enemies were perceived to be appropriate offerings to the tiger-like fierce protector deity. The topmost tier of the temple is decorated with weapons of defeated enemies of Kirtipur. Most of the swords and other weapons up there are of fallen soldiers of Prithivi Narayan Shah’s first and second attacks on Kirtipur, both of which failed.

Surviving inscriptions found in different assets of the temple like a bell, supporting pillars, golden flag gives irrefutable evidence that the temple was renovated many times, sometimes with additions to structures built back many years before. But there is no evidence that marks the date or the person that established the temple. But a genealogical scripture does mention the date of establishment of Kirtipur and Bagh Bhairav with the difference of just one year. The establishment of Kirtipur according to Gopal Raj’s genealogy, was by King Shiva Deva III who ruled Nepal valley from 1099-1126 AD. So the date of Bagh Bhairav’s establishment can logically be claimed to have happened within the period.

The story of the origin of the Bagh Bhairav, as believed by the people is inordinate and it goes accordingly: “The shepherd’s children were grazing their sheep in the forest that lies on the northern slope of Kirtipur, as usual, they used to be engaged in the play of molding the clay in different forms. One day they made a tiger and in search of a leaf that resembles a tongue in shape, they headed inside the jungle. It so happened that Lord Shiva, after a long walk with his son Ganesh, stopped near the clay tiger. While Ganesh wandered off into the thick forest, Shiva grew hungry and as time passed further he gave in to the temptation. Through mystical powers, he merged his soul and body into the clay tiger which then came to life and devoured the sheep.

Seeing splattered blood and scattered bones upon their return, the shepherds searched for clues. Close inspection of the tiger revealed blood inside its mouth. When the children asked the clay tiger if he had actually devoured all the sheep, it opened its mouth wide. Angered by the loss of their sheep, the tiger was never given a tongue. Hence, all images and statues of Bagh Bhairav at Bagh Bhairav Temple are missing tongues. Legend has it that the form of deity still desires a tongue.”