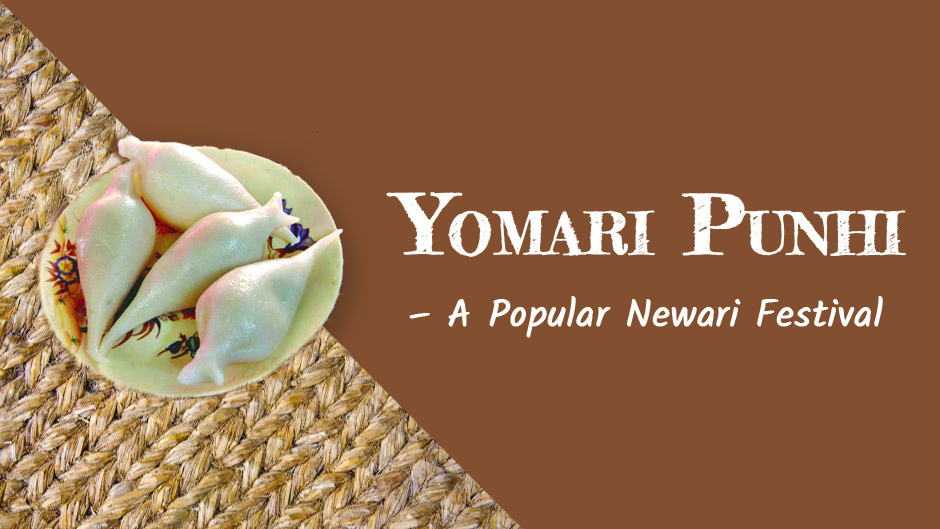 Yomari Punhi is a harvest festival celebrated by the Newari people. The festival gets its name from Yomari, fresh-harvest rice sweetmeat, prepared especially during the festival and enjoyed by all.  It takes place in November/December during the full moon day, the second month in the lunar Nepal Era calendar.

People of the Kathmandu Valley offer worship to Annapurna, the Goddess of Grains, for the rice harvest on this full moon day. According to the legends Suchandra and Krita, a married couple, first experimented with fresh yield of rice from their field at present-day Panauti in ancient times. And what took shape turned out to be known as Yomari.

The new delicacy was eventually distributed among the villagers. As the food was liked by all, the bread was named Yomari, which literally means ‘tasty bread’ in the Newari language. Yomari is a sweetmeat of rice-flour (from the new harvest) dough, shaped like fig and filled with molasses and sesame seeds, which is then steamed.

This delicacy is the chief item on the menu during the post-harvest celebration of Yomari Punhi. Groups of kids go to the neighborhood to requesting for Yomari cakes from housewives in the evening. Sacred masked dances are performed in the villages of Harisiddhi and Thecho at the southern end of the valley to mark the festival.