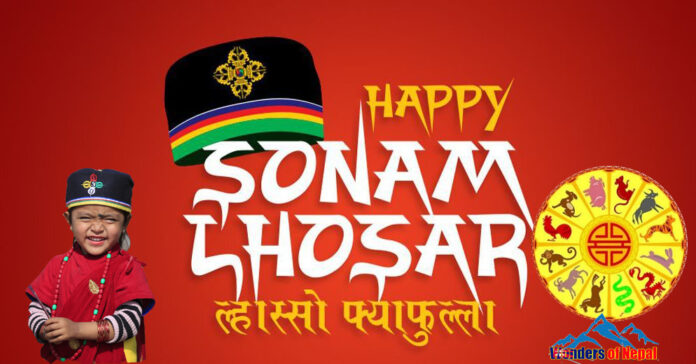 Sonam Lhosar is a unique and amazing festival that is celebrated in a traditional way by Tamang community of Nepal. One of the indigenous groups of Nepal the Tamang community is famous for nurturing a deep respect for nature and having abundant skill in horse riding.

They recognize 12 different years and represent these years as the year of the mouse, cow, tiger, cat, vulture, snake, horse, sheep, monkey, dog, bird, and deer with the mouse being the first year in the rotation, and deer the last.

These 12 years also have been found to represent the 12 signs of the horoscopes as well. It is believed that this system of representation of the years traces its roots to China where the new year is also named after different animals. Only sharing an origin with the Chinese new year, however, this new year is celebrated by the Tamang community in their unique style.

Family gatherings with grand feasts are organized to exchange well wishes amongst the family. Monasteries are adorned with colorful accessories which attract lots of onlookers who also visit these monasteries to receive blessings from the resident’s monks to bolster their progress and happiness in their lives and the lives of their families.

In a community, the people participate in different cultural programs such as music and dance performances also known as “Tamang Selo” which are quite well known for being built around love, the daily struggles of the community, and the meaning of life. Considered a staple musical instrument, the Damphu drum(Similar to a large tambourine) is also used to accompany and augment these performances.

Organizing these myriads of events and festivities, the Tamang community has made sure that this tradition has been going strong for more than 100 years and will go on with the same energy for many generations to come.