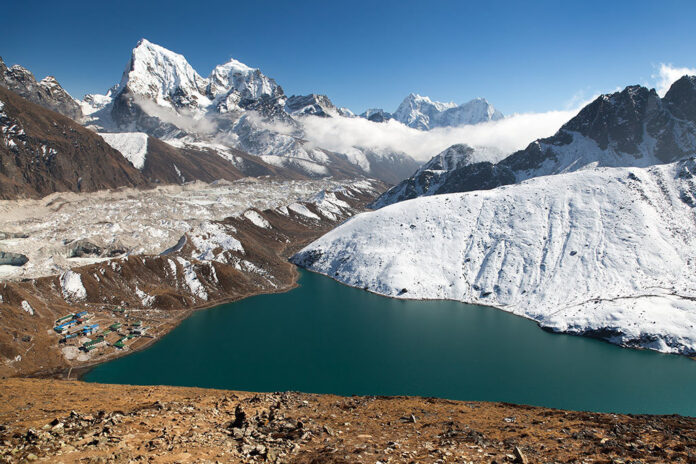 Gokyo Lakes are a series of six spectacular glacial lakes. The lakes are at altitudes of between 4,700m and 5,000m, making them some of the world’s highest freshwater lakes of which Thonak Lake is the largest. The lakes are situated in the beautiful Sagarmatha National Park, which is also home to Mount Everest. Trekkers often visit Gokyo Lakes as a side trip on the popular Mount Everest Base Camp trek.

As sources of permanent freshwater, they have high hydrological value. They feed on waters from various sources, such as seepage from the Ngozumpa glacier, a stream coming from the Renjo La pass from the north-west and another stream originating from the Ngozumpa glacier in the east. These are glacier-fed freshwater wetlands and discharge water to the Dudh Kosi headway via the Taujon Lake and the Longabanga Lake. These lakes are deeper than previously assumed by the researchers. Fourth Lake (Thonak Cho) is the deepest lake (62.4 m) followed by the Gokyo Lake which is 43 m.

A direct connection between the Gokyo Lake and the upper Thonak Cho and the Ngozumpa Cho has not been observed, but these lakes may be connected via underground seepage water. The Gokyo lake system is naturally vulnerable, as it is lying in an ecologically fragile and unstable zone. The outburst of the Ngozumpa glacier is always a threat to the existence of the lakes.

The Gokyo Lakes are considered sacred by both Hindus and Buddhists. About 500 Hindus take a holy bath in the lakes during the Janai Purnima festival, which usually occurs in the month of August. On average 7,000 tourists annually visit the Gokyo Lakes.

The site is worshipped as the residing place of ‘Nag Devata’ (Snake God); a temple of the Hindu deities Lords Vishnu and Shiva is situated at the western corner of the lake.

As with most treks in Nepal, the best times to do it are spring (March-May) and autumn (September-November). In these months the weather is likely to be clear, and daytime temperatures warm. The Khumbu region, however, is known to be particularly cold and dry, and many trekkers develop the ‘Khumbu cough’ due to the dry dust.

It is usually possible to trek in the summer/monsoon and winter seasons, but greater preparation for difficult conditions is required, and you may not get clear views.

The most common way of getting onto the lakes is to fly to the small airport at Lukla. This is a stunning experience in itself. Numerous flights are made daily from Kathmandu, in small fixed-wing airplanes, taking around 30 minutes. However, bad weather frequently closes the airport, so it’s wise to prepare for delays if flying to Lukla and to keep a day or two as buffer days.

The alternative to flying to Lukla is to trek overland from outside Kathmandu, the “pioneers’ route” that was taken by expeditioners to Everest in the 1950s. This connects to the trailhead at Jiri, which passes beneath Lukla. Taking this option significantly lengthens the trek, adding about an extra seven days. It also requires crossing several passes, including one of over 3,500 meters. This is not the ‘easy’ option of getting onto the Gokyo Lakes, but it is adventurous and will help with acclimatization.

Like elsewhere in the Khumbu region, teahouses on the Gokyo Lakes trek are well-developed and relatively comfortable. There is a lot of variety in this region, from ultra-budget to hotels of a quality that you could find in Nepal’s cities, with hot showers and electric blankets on the beds. However, not all grades of accommodation may be available in all settlements, particularly the smaller ones.

The food will also be good, with items such as rice and curry, noodles, momos, soup and Tibetan-style bread featuring on menus. A staple food in the Khumbu region are potatoes, and these feature more prominently on the menus of trekking lodges here than elsewhere in Nepal, with fewer other fresh vegetables. The amount of fresh food available will decline as you progress higher, and costs also rise.

If you’re organizing your trek through a trekking agency, they will arrange these for you. If you’re arranging the trek yourself, you’ll need to pick up your TIMS permit in Kathmandu and your Sagarmatha National Park permit in Monjo.