The World’s Most Dangerous Airport is at Lukla of Nepal. Officially it is called Tenzin-Hillary Airport, Also known as Lukla Airport.  Airports can be challenging for pilots for many reasons. Sometimes it’s the short runway as on many Greek islands. Places like Gibraltar suffer from regular wind shear, while mountainous terrain surrounding airports like Innsbruck creates obvious risks. Airports at high-altitude present dangers due to the effect that low air pressure has on the handling of an airplane. Tenzin-Hillary Airport in Lukla, Nepal, has not just one, but all of these dangers.

It has long been considered one of the most challenging and nerve-wracking airports to land in the world.

High altitude, rapidly changing weather conditions in the Himalayan mountains, an uneven runway surface, and a vertical drop off are just some of the dangers facing one of the highest airports in the world.

It may be scary enough for nervous flyers landing at an airport in general. Strange sounds that the aircraft makes coupled with potentially inclement weather conditions that may not cause concern the frequent flyers or pilots, but could be enough to scare many flyers.

Lukla Airport is the main gateway to Mt. Everest and several other mountains. The most common way hikers, Climbers reach the area is to fly to Lukla, 9,383 feet above sea level.  There are multiple flights between Kathmandu and Lukla every day. Although the flight time is just 25-30 minutes, the two airports are as different as night and day. 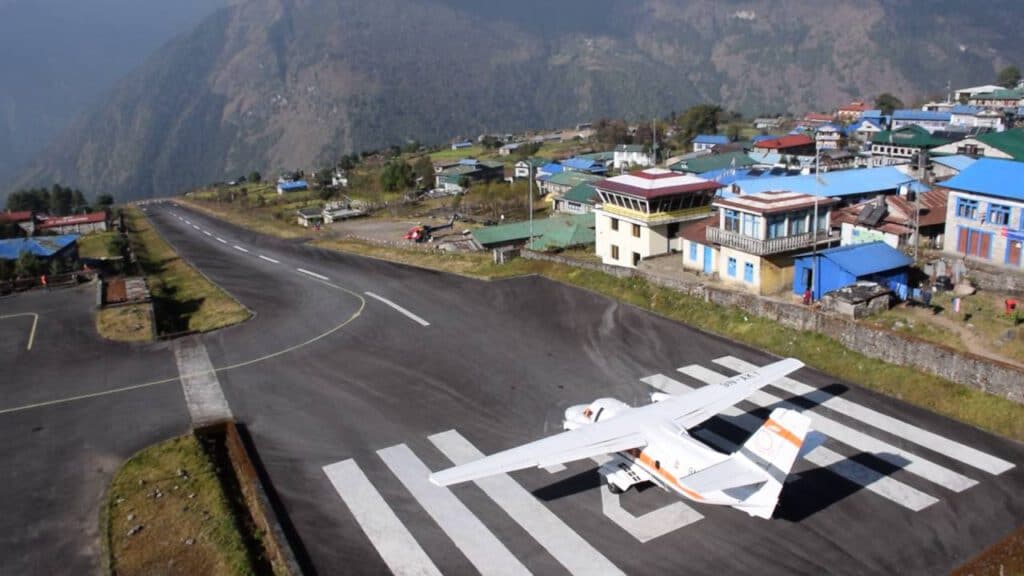 High in the Himalayas

While far from being the world’s highest civilian airport that honor goes to Daocheng Yading Airport in China’s Sichuan province. Lukla’s altitude is still more than enough to cause pilots problems.

The airport is surrounded on all sides by steep, mountainous terrain. The short runway is perched on little more than a mountain shelf. At one end there’s a wall and at the other a steep drop into the valley below.

At these altitudes, air density is considerably lower than at sea level and that has a detrimental impact on the amount of power generated by the aircraft engines, reducing lift. Reduced air resistance also makes it more challenging to slow the plane down. At high altitudes, the longer the runway, the better.

Unfortunately for pilots landing at Lukla, the airport runway is extremely short at just 1,729 feet long. Runways at many of the world’s international airports are more than 10,000 feet long. So short is Lukla’s runway that it slopes uphill with a gradient of almost 12% to assist planes in slowing down in time.

To make matters worse, there is so little opportunity for a missed approach because of the surrounding mountains that there are no go-around procedures. Once an aircraft starts its approach, it must touch down. Given these factors, only helicopters and small fixed-wing propellor planes are permitted to land.

The weather in the Himalayas is highly unpredictable. Sudden mist, fog, rainstorms, or snow are always possible. Despite the short distance and short flight-time, the weather in Lukla can often be completely different from Kathmandu and frequently changes while the airplane is on its way.

In such circumstances, planes turn around and return to Kathmandu. Afternoons are so frequently cloudy that most flights are scheduled for the early morning. Cancellations from Lukla are common. 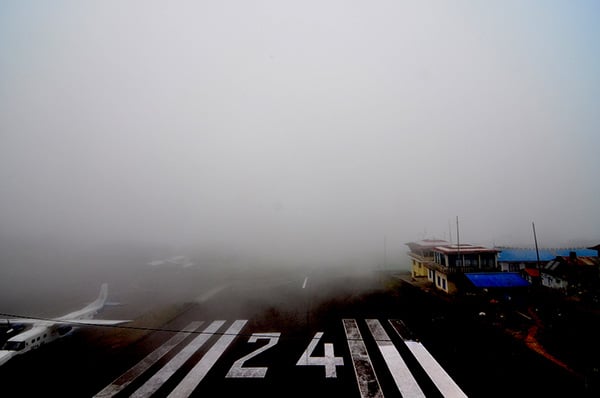