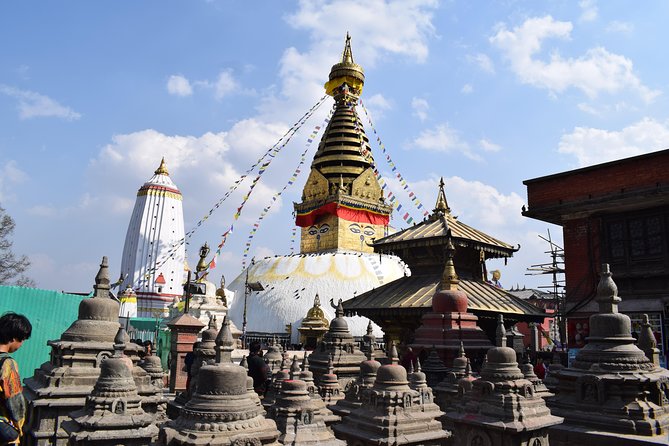 Swayambhunath Stupa is one of the most sacred religious sites in Kathmandu. It is one of the holiest Buddhist stupas in Nepal. It is said to have evolved spontaneously when the valley was created out of a primordial lake more than 2,000 years ago. This stupa is the oldest of its kind in Nepal and has numerous shrines and monasteries on its premises.

Swayambhu literally means “self-existent one”. Believed to date back to 460 A.D., it was built by King Manadeva and by the 13th century, it had become an important center of Buddhism. Legend has it that Swayambhu was born out of a lotus flower that bloomed in the middle of a lake that once spread across the Kathmandu Valley once was. The largest image of the Sakyamuni Buddha in Nepal sits on a high pedestal on the western boundary of Swayambhu. Behind the hilltop is a temple dedicated to Manjusri or Saraswati – the Goddess of learning. Chaityas, statues and shrines of Buddhist and Hindu deities fill the stupa complex. The base of the hill is almost entirely surrounded by prayer wheels and deities.A large number of Buddhists and Hindus alike visit Swayambhu throughout the day. This shrine is perhaps the best place to observe religious harmony in Nepal. The largest crowds of people are seen here on Buddha’s birthday which usually falls in May each year.