Langtang National Park is the nearest Himalayan Park from the capital city of Kathmandu. Established in 1976, the park has an area of 1,710 sq. km that extends over parts of Nuwakot, Rasuwa, and Sindhupalchowk Districts, the southern mountainous terrain of the Nepal-China (Tibet) border. The park lies in the pinnacle, the meeting point between Indo-Malayan and Palearctic realms, and is embellished with important ecosystems of both realms as a conservation priority.

Langtang represents a good spectrum of vegetation types along with the altitudinal range between 1,000m and 7,245m. Landscapes produced by complex topography, geological setting, and altitude can be experienced while walking three days from the Bhotekoshi river to Langsisa. Langtang National Park is the third most popular trekking destination among the protected areas of Nepal. 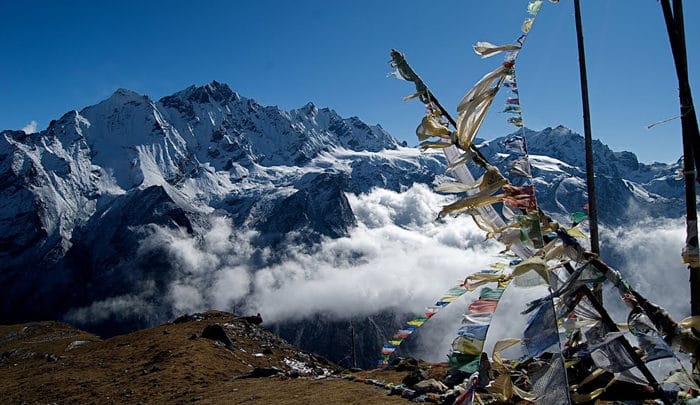 The park’s rich vegetation is characterized by the Sal (Shorea robusta) forests in the southern section of the park and it is gradually taken over by hill forests (2,000-2,600m) consisting of Chir pine (Pinus roxburghii), various species of Rhododendron and Nepalese alder (Alnus nepalensis). The temperate zone (2,600-3,000m) is covered mainly by oak forests that fade to old-growth forests of silver fir, hemlock, and larch in the lower subalpine zone (3,000–3,600m). The Nepalese larch (Larix nepalensis), the only deciduous conifer in the region, is found in the park and a few other places. Throughout these zones, different species of Rhododendron such as R. arboretum, R. barbatum, R. campanulatum, and scrubs of R. lepidotum, to name a few, form a colorful under-story. Tree species such as birch, silver fir, Sorbus and twisted Rhododendron campanlatum are found near the tree line. Above 4,000m elevations, Juniper, and Rhododendron shrubs (R. anthopogon) slowly dissolve into the expansive alpine grassland meadows (LNP, 2001).

It is observed that Langtang’s expansive high altitude meadows are a boon for numerous ungulate species such as the Musk Deer (Moschus chrysogaster) and the Himalayan Tahr (Hemitragus jemlahicus). The red panda (Ailurus fulgens), Himalayan black bear (Selenarctos thibetanus), snow leopard (Uncia uncia), wild dog (Cuon alpinus), ghoral (Nemorhaedus goral) and serow (Capricornis sumantrensis) are the key species of Langtang National Park and more than 250 species of birds are found here. Langtang is the only protected area in Nepal that provides a breeding ground for Dark-rumped Rose Finch (Carpodacus edwardsii) during summer.

Langtang National Park is situated in the central Himalayan region of Nepal. It is the nearest Himalayan Park from Kathmandu. The Bhotekoshi and the Trisuli Rivers form the western boundary of the National Park while the Nepal-China border forms the northern to the north-eastern border. The geographical location of the park is approximately 85° 15’ to 86° E and 28° to 28° 20’ N with an area of 1,710 sq. km. extending to parts of Rasuwa, Nuwakot and Sindhupalchok Districts. The ridge of Gosaikunda and Lekh- Dorjelakpha divides the park into the eastern and western sectors.

The buffer zone of Langtang National Park was constituted in 27 April 1998 and includes the settlements inside the park and a mutual impact zone outside the park with an area of 418.3 sq. km. A buffer zone management committee, 21 user committees, and more than 336 user groups are working to manage the buffer zone to reduce the biotic pressure in the park by generating resources to meet their needs.

September through May offers a variety of natural splendors, from lush temperate river valleys with screeching langur to the spectacular old-growth forest and glacial-craved cliffs rimmed by snow-covered peaks. The weather is also relatively dry except January-February when one may come across snow.Autumn is the best time to visit the Park. By April bursts of red, pink, and while rhododendrons stretch into towering canopies of fir and oak forests. The advent of warm weather makes the Yak and Chauri herds ascend to a higher elevation, making occasional camps in the pasturelands, to follow years of tradition. From June to August, skies are heavy with monsoon rains. During August, a lively festival at Gosaikunda Lake attracts thousands of Hindu pilgrims and September witnesses’ spectacular display of wildflowers, while livestock herds, once again, return to lower pastures.

The seasonal climatic pattern is dominated by the southerly monsoon, which occurs between June and September. The incidence and type of precipitation is a mainly assorted effect of aspect, altitude, and the presence of a rain shadow area (e.g. Langtang and Lende Valleys). The north-south aligned Helambu drainage basins are exposed to the full effect of monsoon air streams, as far west as the upper Tadi Khola. Rainfall data shows that Sermathang and Tarkeghyang receive the most precipitation. The Langtang and Lende valleys are sheltered from southerly airstreams by the Gosainkunda Lekh-Dorje Lhakpa Range and Langtang Himal respectively. Consequently, monsoon arrives later and departs earlier from these inner valleys. The drainage of the park can be divided into two main watersheds. South of the Gosaikunda Lekh-Dorje Lhakpa range, drainage is southwards and then east into the Soon Koshi. The drainage north of this is initially westwards into the Bhote Koshi-Trisuli rivers and then southwards. The park occupies a tectonically interesting and important geographic position within the Nepal Central Himalayas. Igneous, metamorphic, and migmatite rock types are found within the park. Hot springs, occurring near Timure and Syafrubesi along the Bhote Koshi, are an indication of deep-seated tectonic activity still present in these relatively young mountains.

The average monthly rainfall peaks in August in Kyangjin. Based on the 1989-98 observation of rainfall data supplied by the Department of Hydrology and Meteorology, the maximum average rainfall is 160mm during this month. Average annual rainfall in Sermathan, based on the data from 1989 to 2006, slightly exceeds 900mm during July and the rainfall mostly occurs from June to September. Similarly, the average monthly rainfall reaches its peak in August in Dhunche with 500mm.

The average monthly maximum and minimum temperatures recorded in the Kyangjin Metrological Station based on observations between 1989-1998 by the Department of Hydrology and Meteorology are presented in the following graphs with two moving averages of the previous and succeeding data. The temperature reaches its maximum point in July- August and falls to a minimum in December-January. The minimum average temperature falls below zero degree from November to April.

Based on observation from 1989 to 2006, the average monthly maximum temperature in Dhunche reaches 24 degrees and varies with a narrow limit with this figure from May to September. Between December and January, the minimum temperature of the same meteorological stations falls below 5 degrees.

Relative humidity data is only available in Dhunche station within Langtang National Park. Average monthly relative humidity is the highest between June and Oct exceeding 80% both in the mornings and evenings.

Sub-tropical vegetation characterized by Sal (Shorea robusta) forest in the southern section of the park is gradually taken over by hill forest (2000-2600m) consisting of Chirpine, Rhododendron, and Nepalese alder. The temperate zone (2600-3000m) is covered mainly by oak forest fading to the old-growth forest of silver fir, hemlock, and larch in the lower sub-alpine zone (3000-3600m). The Nepalese larch (larixnepalensis), the only deciduous conifer in the region, is found in this park and few places elsewhere. Throughout these zones different species of Rhododendron such as R. arboretum, R. barbatum, R. campanulatum, and R. lepidotum (scrubs) to name a few, form a colorful understory. Tree species such as birch, silver fir, Sorbus microphyla and twisted Rhododendroncampanulatum are found near the tree line. It is here at 4000m Juniper and Rhododendron shrubs (R. anthopogon) slowly dissolve into expansive alpine grassland meadows. Langtang’s expansive high meadows provide summer habitat for numerous ungulate species such as musk deer and Himalayan tahr. The park is also well known for its populations of the red panda, Himalayan black bear, snow leopard, wild dog, ghoral, serow, and more than 250 species of birds.

One airport was constructed in Kyanjin valley in the past but had never operated. Helicopter service is also available for fly-in tourists at Sermathan, Dhunche, Godatabela ,Kanjin, and Gosaikunda.